The goal of this document is to collect and share resources in the field of psychology that pertain to libertarianism and the converse tyranny. I am not limiting this to explicitly libertarian scholars and research.  If you have related material, I would love to include it here. The concept of liberty in the field of psychology is defined as research and theories relevant to the issues of voluntary interaction, self-determination, and celebration of the individual’s role in society.   Psychologists’ and their work addressing the role of liberty: 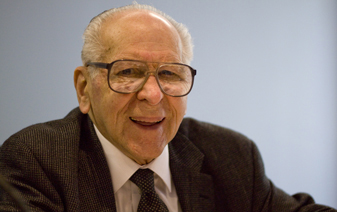 Dr.Thomas S. Szasz Thomas Szasz’s work while diverse and covering numerous topics, shared a theme of questioning the role psychiatry takes in directing and manipulating society. Additionally, Dr.Szasz objected to the general and legal concept of mental illness because it allowed for the invalidation of human rights and autonomy through involuntary hospitalization. His argument included the appeal to remove psychiatry from the State. As psychiatry began in the 1700s to remove and correct behavior and associations deemed deviant or abnormal, psychiatry continues to be a social force used by the State under the guise of science. Psychiatry then is a social tool used to moderate and correct non-normative behavior. Dr. Szasz’s proposed solution was that individual’s be presumed competent and that strict legal definitions of incompetence be established, thereby removing the arbitrary authority of psychiatrists to determine competence. Following on this reasoning, Dr. Szasz objected to the legal prohibition of medical substances as well as alternative lifestyles. Links: http://www.szasz.com/ http://www.szasz.com/freeman31.pdf Works: Ceremonial Chemistry: The Ritual Persecution of Drugs, Addicts, and Pushers (1974) The Age of Madness: A History of Involuntary Mental Hospitalization Presented in Selected Texts (1975) Law, Liberty, and Psychiatry: An Inquiry into the Social Uses of Mental Health Practices (1972-1989) Our Right to Drugs: The Case for a Free Market (1992-1996) Cruel Compassion: Psychiatric Control of Society’s Unwanted (1994-1998) The Manufacture of Madness: A Comparative Study of the Inquisition and the Mental Health Movement (1970-1997) Faith in Freedom: Libertarian Principles and Psychiatric Practices. (2004) ISBN 0-7658-0244-9 Coercion as Cure: A Critical History of Psychiatry (2007)

Dr.Nathaniel Branden Nathaniel Branden’s work follows a long association with Objectivist Ayn Rand. His work primarily dealt with the nature and role of self-esteem and self-direction. A major focus is placed on living consciously and accepting oneself. With the loss of self-esteem and valuing self, the individual becomes Links: Works: The Psychology of Self-Esteem (1969) The Disowned Self (1972).

Dr. Philip Zimbardo Philip Zimbardo’s work in the notorious Stanford Prison Experiment, where students internally adopted the personas of either cruel guards or humiliated prisoners in just three days was followed by a career dedicated to countering the mechanisms that enable tyranny and cruelty. Following his work in the shyness clinic, Dr. Zimbardo founded the Heroic Imagination Project, wherein he and compatriots seek to enable teachers to empower students to resist authoritarianism and systemic evil. Zimbardo’s current theory is that evil is a systemic issue and that good people can be lead to becoming evil based on the social influences of their surroundings. His projects focus on empowering individuals to be dynamic entities with their surroundings and communities. “My definition of evil is the excercise of power to harm and hurt others. Most evil is really done not by people but by systems, by governments. ”

Dr.Erich Fromm Erich Fromm’s work, while being primarily based on Freud and Karl Marx’s theories, features the theme of liberty because of his focus on people’s need to love and recognize one another as individuals. His theory deals heavily with the issues of economic freedom, free time, and the resulting lack of connection to other people. One practical example of his works is the Automaton Conformity.  The concept that people will gain acceptance from others by conforming to external standards or forcing others to adhere to their own standards. “In the mechanisms we have been discussing, the individual overcomes the feeling of insignificance in comparison with the overwhelming power of the world outside himself either by renouncing his individual integrity, or by destroying others so that the world ceases to be threatening. Links: http://realsociology.edublogs.org/files/2013/09/erich-fromm-the-fear-of-freedom-escape-from-freedom-29wevxr.pdf http://coyoteprime-runningcauseicantfly.blogspot.com/2010/11/erich-fromm-automaton-conformity.html Works: Fear of Freedom (1941) Man for Himself (1947) The Sane Society (1955) The Art of Loving (1956) Marx’s Concept of Man (1961) To Have or to Be? (1976) On Disobedience and other essays (1981)

Dr. Viktor Frankl Viktor Frankl, a neurologist and psychiatrist,  believed that between stimuli and response, there is a personal volition and will.  From his experiences in Nazi death camps, Frankl came to believe that people cannot avoid pain, however they can choose how to respond to that pain. His theory of logotherapy is that man, rather than being motivated by pleasure, is the pursuit of meaning. Further, Frankl believed that man is not wholly dependent on the circumstances for his or her actions, instead having a choice. “Man is not fully conditioned and determined but rather he determines himself whether he give in to conditions or stands up to them. In other words, man is self-determining. Man does not simply exist but always decides what his existence will be, what he will become in the next moment.” (Man’s Search for Meaning, p. 131 to 134) Despair at meaningless is not a neurosis. The will to meaning concept is contradicted and countered by the will to power and the will to pleasure. Dr. Frankl posited that society suffers from crime and violence because individuals are thwarted in their search for meaning. Existential crisis is not a disease or neurosis, rather it is a celebration of intellectual honesty. Will to power and will to pleasure actually represent a denial of choice and freedom, an attempt to deny self-responsibility and delve into hedonism. Links: http://www.viktorfrankl.org/e/ http://www.ted.com/talks/viktor_frankl_youth_in_search_of_meaning Will to Meaning Man’s Search for Meaning – Audiobook Works: Man’s Search for Meaning (1959) The Will to Meaning (1988) The Unheard Cry for Meaning (2011) Posthumous collection of writings

Dr. Milgram’s experiments were largely inspired by the atrocities committed in Nazi Germany. His original goal was to show that average, good people could not be led or tricked into committing atrocities against other people. His finding were the largely the opposite. Given the appropriate situational factors, up to 90% of people can be led to killing innocent people. These findings fall within the social psychology field. Links: http://www.simplypsychology.org/milgram.html Works:

Sociology and Psychology have a great deal of overlap, especially given the field of Social Psychology. Because of this overlap, here are sociologists and their works that may be of use.

Dr.Robert Nisbet, founder of the Sociology Dept. of Berkeley, was a noted conservative Communitarian. His overarching theory was that war empowered governments to gain control over society through patriotism and that communities protect liberty by dividing loyalty away from the singular power of the State. Nisbet utilized history extensively in his writings, using Alexander as one of the earliest examples of government through war.

Franz Oppenheimer was a sociologist/political economist. His theories and work center around the “conquest theory of the state” theory. This theory is that government is the actions of victors over the defeated to control and regulate society for their personal benefit. Following this concept, Oppenheimer derided Capitalism as an establishment by the victors to create systemic inequality between social groups, although his definition of capitalism is more in line with Crony Capitalism rather than free trade. Works: Der Staat (The State)

These individuals have contributed much to the theories of psychology and sociology, yet do not outright endorse liberty, some even rule out and blast la se faire organization, yet their work is important enough that any libertarian should be familiar with their work.

Dr.Herbert A. Simon A multidisciplinary sociologist, psychologist, economist, political scientist, and philosopher. Herbert’s research and theories touch on so many different aspects of human nature that he is difficult to classify. However, his works on organization, social decision making, and obedience to authority make him a highly influential figure in political science, business, and social psychology. Of note is Dr. Simon’s propaganda model, developed with Chomsky, which posits that private media are businesses selling their reader/viewers as commodities to the highest bidding advertisers, and that their primary source of information come from populist propaganda sold by the government and large corporations.

“No one has characterized market mechanisms better than Friedrich von Hayek.” – Herbert Simon

Contributions made by: Joshua Connelly,

One thought on “Works on the topic of liberty within the field of Psychology: Work in Progress”