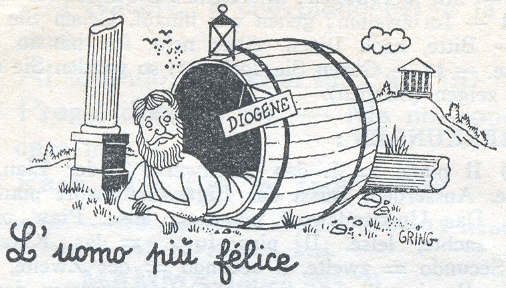 Diogenes is a notorious cynic philosopher of ethics. Considered the trend setting figure of the cynics, Diogenes eschewed the use of written teachings in favor of verbal conversation. Diogenes considered his personal and public life as his primary means of teaching people how to live. 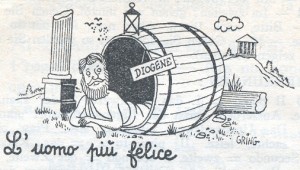 In short, Diogenes believed in an asceticism free of social and material pleasantries. He lived in a bathtub because mice have no homes, refused to use cups because he saw an orphan boy drink from his hands. He was rude to people he did not personally respect and was a known public masturbator (in his tub). His belief was that anything not shameful in private ought not to be shameful in public. Not simply a contrarian, Diogenes hoped to show others that social rules and values, such as a love for money and prestige, were not necessary for living the good life.

His life presents more than simple anecdotes of a homeless person however, Diogenes was known for his wit and biting insight. After Plato described man as “featherless bipeds”, Plato took a plucked chicken into the debate hall and proclaimed that he had found Plato’s man. At another point, when Alexander the Great tried to shame Diogenes for his lack of appreciation for the returning victors (AKA Alexander) by asking if there was anything he could do, Diogenes asked Alexander to move out of his sunlight as he was trying to sun bathe. Alexander was purported to be so impressed with Diogenes that he refused to allow his officers to accost Diogenes, saying “If I could not be Alexander, I would be Diogenes.”

In all, Diogenes was dedicated to his beliefs, to the point of enduring long hardships and difficulty. Beyond his disagreeableness, Diogenes felt great concern for the poor and anger at the unfeeling rich. For Christians, Diogenes is interesting as the Apostle Paul of Tarsus referenced Diogenes in 1 Timothy 6:10 “For the love of money is a root of all kinds of evil.” Diogenes had said “The love of money (he declared) to be mother-city of all evils.”

To say that Dioegenes was any one thing would be to do him and his life a disservice. He took a difficult ideal and lived it out. Like any zealot, he at times lost sight of common sense, yet his far out perspective revealed truth.